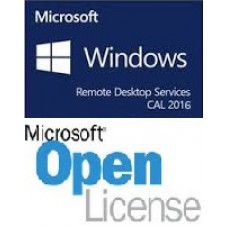 User CAL A User CAL permits one user (using any device) to access or use the server software. User CALs are likely to be more cost effective than Device CALs if there are multiple devices per user (for example, a user has a laptop and handheld computer accessing Windows Remote Desktop Services)

Please Note that as per the Open License Program, a minimum of any 5 OLP units must be purchased per order without a valid authorization or agreement number.

Microsoft License can be accessed through VLSC site; there is no more paper license.